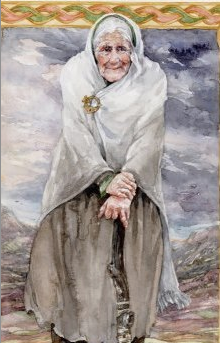 Ember is pleasantly surprised to find herself in the Great Temple garden. She remembers that she needs more healing herbs, though she is unclear on why. She finds old mother Hilda among the beds, and she is filled with the warmth of friendship. Hilda is an emeritus priestess, too old and frail to instruct, but an important confidant for Ember. When Ember arrived at the Temple, shy and insecure at 14, it was Hilda who first made her feel welcome, and the crone has over the years been a key figure in keeping Ember secure and grounded when faced with the challenges of her lessons, the petty rivalries of the other girls, and her crises of faith.

“Doter Ember, what brings you to the gardens?”

“Moter Hilda, I do not know! But something is troubling me.”

“Walk with me, let us learn together.”

Hilda takes Ember’s arm, and allows the young woman to support her, as they walk inside. They are in Hilda’s private chamber, where a little coal stove heats the small room. Shouldn’t they have had to walk more to get here? Never mind – the woman is speaking. “Now, dear, what is it that is wrong?”

Ember tries to say, but her thoughts slip and swim around.

Hilda opens the door of the stove as if to add a coal, but leaves it open. Ember stares at the fire inside while the old woman murmurs. As Ember watches, the flames seem to surround her, until all she can see is their orange…and red. Red. Red like the flame-red hair of Morgan. Red like the vicious slash across the neck of the man with the blanket. And the man in the doorway – the helpless man who was sleeping when Morgan slit his throat. Red like the blood gushing forth from the guts of Hazrad – Ember’s hands, both pressed firmly on the wound, trying to staunch the flow of blood. Ember’s hands, covered in blood.

“Moter, there is much violence in the world,” says Ember, hoping the old woman can still hear her. She has treated wounds before, of course – the priests and priestesses of the temple spar daily with clubs and maces – there are always bruises to poultice, bones to set, joints to relocate. But so much blood! She has never seen the like.

“Yes,” says the voice of the crone.

“How do I know what is right? I mean, those men, we just cut them down! Should we have talked? And Morgan! She is so cold! Is she wicked? Or is she the only thing keeping us alive?”

The old woman hums softly, and the flames recede – Ember can see the room again. “Aren’t you too big for these questions? Do you remember your catechism?”

“Tell me the verse of compassion and conflict.”

Joined we are with all, and all are one – but some stand closer to our hearth and some are held closer in our heart."

“Good,” the old woman smiles. “So what is Morgan?”

Ember wishes to say outlander – for she is not of the north, this strange, fierce, half-elf warrior-woman. But that is wrong. That is not honest. Finally, she says “Guest. We are met under one roof. Our fates are bound together, though we are not family.”

“But, reverend moter, though we are bound together, I cannot just let her do as she wills? How can I control her, if I need to?”

“Think you again on the Teachings. What does Glöð do when Logi rages and burns? What does She do when Eysa and Eimyrja hurt their playmates?”

Ember recites: “Against unstoppable force one can do nothing. Get out of the way, save oneself, save one’s family. Treat the wounds and mend the goods later. But against petty wickedness, one intervenes. Hide the ale. Withhold the hearth. When the children are hungry, they will listen to reason. When the husband is met with an empty bed, he will bend.”

“So what power do you have to convince?”

“My healing. If they want my healing, they must listen to me – for I can withhold it. But moter, I remember now – I was in the garden because I am out of healing herbs.”

When Ember awakes later, in a strange bed, the first thing she sees is three forlorn-looking men in a cage, their faces vaguely illuminated by the wan moonlight chancing through the bee-hole in the side of the pyramid. It is not until then that she remembers Hilda died last winter.