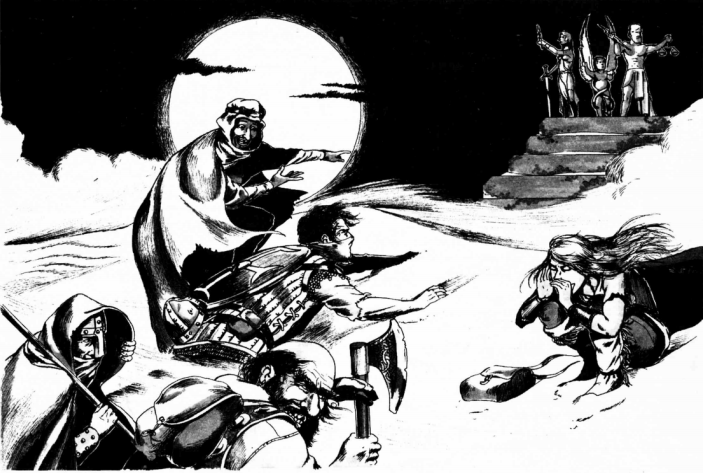 Midway through the next morning, Hazrad finds a few large stone blocks sticking out of the sand. Continuing on, the group finds the remains of a city, worn by wind, sand, and time. Most of it is buried by sand, and only the higher buildings and walls stick out. In the center of the city is a step-pyramid, with at least five layers, each 20 feet high, although the last one is more than half buried. On top of the highest tier are three 30’ high bronze statues.
There is a bearded man with a balance and lightning bolt, a winged child with a wand and a handful of coins, and a beautiful woman with a sword and a sheaf of wheat. Hazrad says that the child is a god from pre-al-Kalim times, the Nithian god of magic. These ruins must be at least a thousand years old.

On the south side of the pyramid are a broad flight of stairs, leading all the way to the top. Summoning their last reserves of energy, the party climbed the stairs and methodically searched each layer for a means of ingress, while Pooches waited listlessly in the shade of each layer. Finally, on the uppermost layer, Iris found the desiccated body of a hobgoblin with a bolt in its chest propping open a secret door. The party was grateful to enter the cool shade, although Morgan quickly triggered the unloaded crossbow trap and gave them to realize this was not exactly a safe haven. 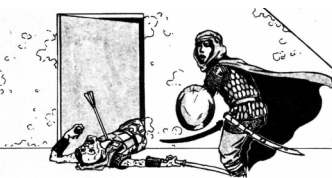 The entire interior of the first layer was a single room, with bronze cylinders from floor to ceiling as the bases of the statues above. They had doors, but opening the door of one made a floor block fall into the chamber below. Odlief spiked the door to the exterior, as well as the door to one of the cylinders, open.

The chamber below housed a foundry with oil, a forge, and spare parts for the maintenance of the statues above, which could move by means of levers and gears and which had speaking tubes. Three doors led out. Exploring this level, the party found three empty and abandoned rooms, a room with a giant lizard, a room with sprites, and a room full of green slime. The big find, however, was a complex of three rooms housing ten men and a hive of giant bees. The men all wore blue tunics under chain armor and gold masks with the faces of the bearded man on the statue. The party made a surprise assault on them – although most were put to sleep immediately, their leader proved to be a fierce fighter and nearly slew Hazrad. He remains unconscious under the care of Ember. Seven of the men were slain – the three remaining, including the leader (who was captured by means of Jon’s net), have been locked in the cage surrounding the bee hive.

Now the party has found a place to truly rest, and have food and water for at least a week. They have discovered both a trapdoor down and a staircase. They do not yet know who these strange people are nor why they are here.